Any age. Any ability. Please view the joining the club page for details. 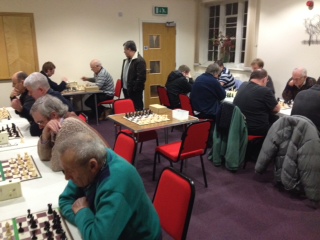 A well attended and busy (k)night at the club as the Brewood players battle it out in the Shropshire Rapidplay Chess League.

On Tuesday 3rd February 2015 Brewood played host for the first time in the Shropshire Rapidplay League welcoming Telford and Newport to St Mary’s.

Brewood have been affected more than most by the late withdrawal of Oswestry from the league but for their home fixture were able to field a phantom team of its own players to represent Oswestry and ensure everyone had a full quota of 3 games.

The home team had enjoyed reasonable success in the competition to date but most importantly the format had been enjoyed by its players. The captain dropped both himself and Club Captain John Fenby from the starting line-up following miserable 0-3 returns on the previous match night at Shrewsbury to be replaced by Peter and David who had played the other fixtures.

Brewood A v Telford A

The A Team got off to a fast start in the first game against Telford with Dan securing an early mate, soon to be followed by Peter on Board 3 giving them an unassailable 2-0 lead.

Mark however managed to snatch defeat from the jaws of victory on top board, leaving all to play for on Board 2 but in the end David went down fighting to Roger Brown who went on to record a 100% evening for Telford.

Brewood A v Newport B

Newport B have been the form team in the league but Brewood saved their best performance for this game.  Although a couple of pawns down, Dan’s pin and skewer combination deprived his opponent of his queen and victory soon followed.

Mark had a reversal of fortune this time out and despite being behind for much of the game, time pressure told and he snuck in for a win.  David enjoyed an excellent result on Board 2 leaving Peter to go for the whitewash.  However, Peter found himself with a rook against two advanced pawns and despite having a big time advantage had to settle for a perpetual.

Brewood B v Brewood A

NB:  For the purposes of the Shropshire Rapidplay League table Brewood A recorded a default 4-0 win over Oswestry.

The final game against the phantom Brewood team didn’t count for the league but with pride at stake it was the phantom team who came out on top.  Mike gunned down Mark on top board to finish with a perfect score for the night and give a gentle hint to the selectors whereas Paul picked himself up from 2 defeats to take down David.

There was only 2 outcomes on Board 3 when I picked this up with Peter having conspired to be 2 pieces down against Andrew.  The problem was it was knight and bishop!  Now we all know Andrew can do this one unlike most in the club but on this occasion under intense time pressure it was not to be and the game ended in the draw but meant the phantom team got the bragging rights.

For once, Dan was last to finish but the youngster got some consolation for the A team with a 7th rank checkmate combination against David to give him a 3 out of 3 for the evening and indeed 5 out of 6 in the league.

Great to see the club so full and our members and visitors testifying to an enjoyable evening.  The results do leave Brewood top of the league but having played more games.  The title is still probably up for grabs though with the team next in action at Newport in April.

Oops, you forgot something.

The words you entered did not match the given text. Please try again.

The Duke of Edinburgh Award at Brewood Chess Circle

Start a Free Blog at Webs.com